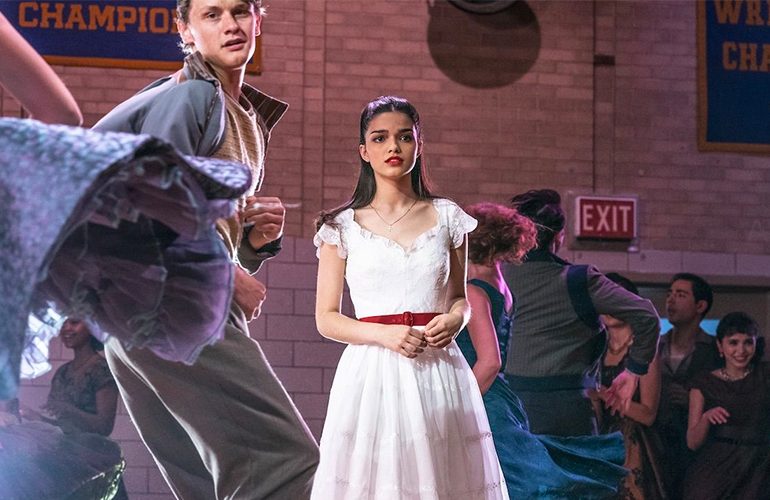 Steven Spielberg’s West Side Story remake is coming out in December 2021 and we are snapping with excitement! Although the 1961 original was historic, it’s undoubtedly time for an update. With critics raving about this sublime version, it’s time to weigh in with matching sparkle.

In West Side Story, love, tragedy, anger, class tension, and disenfranchised rage are put on display in a rumbling, technicolor flurry. A powerful production deserves worthy statement pieces. At James Allen, we were inspired by the gorgeous costumes, iconic soundtrack, and ageless story to hand-pick the perfect engagement rings for Broadway fans.

Read on for West Side Story-inspired lookalike engagement rings!

Perhaps the most iconic costume in West Side Story is the dress Maria wears to the neighborhood dance: a simple white dress accented with a bold red ribbon. We’ve got the perfect complement to her outfit: this white gold ring with a ruby center stone. An engagement ring is a perfect accessory for this outfit because 1) it’s at the dance that Tony and Maria have their first encounter, and 2) Maria’s outfit is made by Anita, her best friend, a talented wedding dress seamstress.

In Spielberg’s version, Anita struts through the neighborhood dance in a gorgeous bright yellow dress with a red ruffled petticoat. There’s no better ring to match her twirling antics than this yellow gold bird of paradise engagement ring set with a beautiful ruby center stone. Round and marquise cut diamond dot its unique asymmetrical halo.

In the 1961 movie, Anita, played by Rita Moreno, is instantly recognizable in her purple mermaid dress. She leads the pack in every dance, swirling her skirts in an unforgettable purple vision. This 1.8-carat emerald-cut amethyst will, like Anita, mesmerize a crowd.

Tony and Maria’s first meeting at the neighborhood dance is magical. Almost instantly, they lock eyes and are besotted with one another.

The Challenge Dance in the gym starts out as a get-together dance. Glad Hand sets the kids up in two circles: “Boys go on the outside, girls on the inside…when the music stops, each boy dances with whichever girl is opposite.” What better to wear to a Challenge Dance than a blingy double-halo engagement ring that resembles the dual-circled dance floor?

Here you are free and you have pride! This patriotic ring’s red, white, and blue colors represent the national flags of both Puerto Rico and the United States. This white gold setting, rubies, and a stunning sapphire make this ring one that you’ll feel proud to wear throughout the country.

In Spielberg’s remake, Doc no longer runs the local drugstore; rather, his place has been taken by his widow, Valentina. And Valentina is played by Rita Morena, who won the best supporting actress Oscar for playing Anita in the original 1961 film! We’ve chosen an intricate vintage ring to honor this timeless Hollywood legend. A beaded navette pattern gives off an effortlessly French air, and a pavè halo adds even more sparkle.

Oh, the world is wild and bright with this dual-leveled bypass ring. The center diamond’s offset mounting resembles the couple’s late-night meeting on the balcony: with Tony professing his newfound love from the alleyway to Maria, who lovingly looks down upon him from her second-floor apartment and responds in kind.

This symmetrical half bezel-set ring brings to mind the confrontation between the Sharks and the Jets. The half-bezel setting is designed almost as if the side stones are pushing the pavè half-halo up and over the center diamond like a cresting wave.

West Side Story is all about simmering class tensions that can’t help but boil over when confronted with the love of a young couple, and this seemingly overflowing diamond engagement ring captures the story’s teeming emotions.

Like Tony, we can’t help but burst with optimism at this petite pave ring. It’s one of our most popular styles, with over 1000 five-star reviews! Its band twinkles thanks to its French Cut pavè settings, which feature tiny v-shaped slots along its edges that expose each diamond to even more light. And more light = more sparkle.

A tomboyish outsider for most of the play, Anybodys tags along with the Jets until she’s officially welcomed into the gang after a post-rumble act of bravery. Anybodys is tough, persistent, and plucky, deserving of a unique engagement ring that can withstand Jet-worthy hijinks.

This two-tone ring, with white gold on the outside and yellow gold within, suits the code-switching Anybody’s comfort across the neighborhood’s borders. Sure, she says “I ain’t never gonna get married. Too noisy.” But everyone deserves some sparkle, and diamond rings aren’t only for engagements.

Get Your Own Star-Studded Engagement Ring

We’ve got the scoop on why you absolutely need to add a blue sapphire ring to your jewelry box. Read on to find out!

You may be wondering: With so many ring styles and stunning gemstone options to choose from, what sets blue sapphires apart? Featuring a mesmerizing blue gemstone, sapphire jewelry makes the perfect gift for that special occasion. And trust us, you’re going to want a blue sapphire ring. Brace yourself for a whole lot of BLUE.

There’s no denying that diamonds are the de facto choice when choosing your sparkler. But we think a blue sapphire comes a close second, and we’re not alone! Blue sapphire is one of the rarest gemstones to grace an engagement ring. Choose blue sapphire and set yourself apart from the crowd with these statement pieces.

2. A History Of Glam

Blue sapphire rings are popular amongst celebrities and have been associated with the royal family for centuries. Notably, the September birthstone brings to mind the world’s most famous (and gorgeous) blue sapphire ring once belonging to Princess Diana and currently worn by Kate Middleton. It broke trends back then and is still making its mark today.

Blue sapphire is an inherently strong and durable gemstone, with a score of 9 on the Mohs scale – second to only diamonds. This means that you can flaunt your blue sapphire ring without worrying about chipping, scratching or cracking from everyday wear. Choose a traditional shape and get creative with a sparkling white gold ring.

The tradition, uniqueness and lasting beauty associated with sapphires also come with dazzling affordability. Sapphires typically cost less per carat than diamonds, giving you more design flexibility and bang for your buck. Whatever style you choose, one thing is certain – you’ll shine down the aisle in a ring with a splash of blue 😉

When you choose a blue sapphire ring, it will be a perfect accessory for almost any outfit, whether you’re casual in blue jeans or glamming it up in a cocktail dress. No matter the occasion, you’ll always have an excuse to put yourself in our blues.

All Blue-d Up? Check out the articles below to get more inspiration! 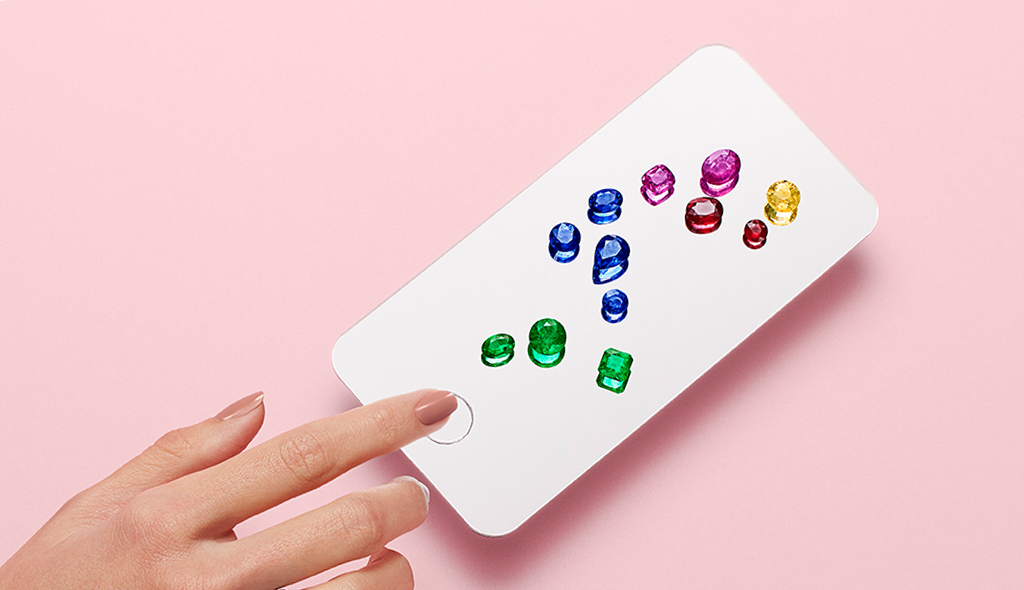 Sapphires, rubies, and emeralds are forever. Want something a bit extra? Look no further than gemstone engagement rings.

There are oh so many reasons to choose a gemstone engagement ring. Go gemstone in order to feature your favorite color, wear your birthstone, or honor a special memory. Or, you know, because gemstones are pretty.

The classics aren’t always in black and white. Before diamonds rose to the peak of their popularity, history was full of glowing gemstones in full color that radiated personality. In fact, Queen Victoria’s engagement ring featured a center emerald, rubies, and diamonds in the shape of a serpent. Now that is style.

“It is stunning! The sapphire makes the ring unique and special.”
-Christian P.

“Modern and simple in white gold. And the blue sapphire is stunning.”
-Hillary M.

“The yellow sapphire looks like the sun on my hand!”
– Amy N.

“Having the pink sapphire with the rose gold gives it a peachy shade that complements my fiancée’s skin tone nicely.”
-Christian B.

“Rubies are my fave gemstone and my fiancé knew I always wanted an engagement ring that had a ruby in it.”
-Justine T

“The center ruby with the yellow gold makes for a lovely combination.”
-Alexandra A.

“My three favorite things in the world – diamonds, emeralds, and gold!”
-Rachel L.

“I chose this ring because emerald is my birthstone.”
-Cherlene R.