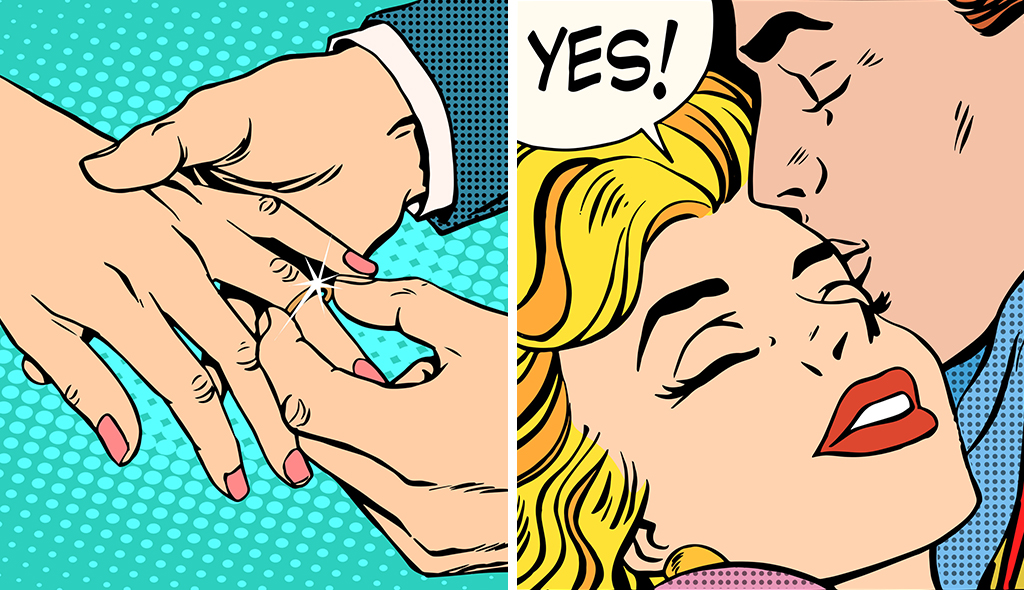 The Tradition of Engagement Rings

The story dates all the way back to pre-historic times, when cavemen would braid strands of grass and tie them around the ankle, waist and wrist of the woman of their choice. Today, the tradition looks quite different, with modern day women swooning over brilliant (and expensive) diamonds meant to symbolize their partner’s everlasting love.

Have the savvy jewelers got us caught up in their marketing scheme, causing us to lose sight of what the tradition is really about? Or was the discovery of diamonds the best thing to ever happen to the Modern Woman, the proposal a remaining grand chivalrous act that we so desperately need to hold onto in today’s world where a man even holding the door open for us can be hard to come by?

A look at the tradition, and what it symbolizes:

Although some form of engagement rings has been the symbol of eternal love and commitment since cavemen were around, the very first one didn’t come into the picture until 1477. Archduke Maximillian of Austria gave a diamond ring as a token of love to the woman he was to marry, Mary of Burgundy. Archduke Maximillian was a trend-setter, apparently – this diamond ring sparked a common practice among European nobility and aristocracy for male suitors to present diamond rings to the women they wished to marry. These Victorians often paired diamonds with colorful gemstones and set them in filigree rings. Wearing the engagement ring on what we now call the “ring finger” can be traced back to the Egyptians, who believed the “vein of love” at the top of the ring finger was directly connected to the heart.

Diamonds are the hardest substance in nature and represented invincible strength in ancient Greek times. It’s no wonder that the immortal diamond would become the international symbol of everlasting love and marriage.

It wasn’t until the 1930s that diamonds became more accessible, with the help of DeBeers miners in Africa. DeBeers began to market diamond rings intensely with the famous slogan “A Diamond is Forever.” This caught on quickly, as couples embraced this idea of celebrating their commitment with a beautiful stone that would last forever, just like their marriage. Genius marketing campaign, yes it was – but it was also just the thing that people were looking for.

To this day, the diamond ring remains the most popular choice worldwide. Gemstone rings are also given, but the durability of the diamond speaks to the majority of future brides and grooms.

If you experience true love, you know that you don’t need something material to prove your commitment to each other. However, the tradition of presenting an engagement ring has become a worldwide milestone achievement; it’s a tangible, beautiful way to mark your official decision to spend your life together. Although many couples already know that they will get married, the engagement ring makes it a real promise. What is a wedding ceremony, after all, if not an official declaration of your love and commitment toward each other? The wedding is a way to mark in front of family and friends the declaration that you will spend your lives committed only to each other, just as the engagement is a way to mark the promise of the wedding.

Engagement rings may not be a necessity, but they definitely are a sentimental, romantic gesture. They are a reminder of the promise and of one of the most beautiful moments in your life. Attached to your body, they are an easy way to be suddenly caught by the sparkle of the majestic rock, and to be taken back to when your commitment began. That is why engagement rings will never go out of style – people cling to tradition, especially when that tradition is such a magical and romantic one. The tradition is a symbol of the unity between the bride and groom-to-be and will forever evoke a cherished memory. In today’s society with the idea of being a gentleman largely looked at as old-fashioned and irrelevant, it’s even more important to keep the chivalrous proposal alive. After all, every girl deserves to feel like a princess once in a while, and being given an engagement ring brings us our very own fairy tale.

What does the engagement ring mean to you? Tell us in the comments!